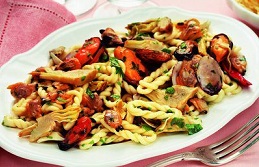 The Mediterranean island of Sardinia has a wealth of traditions and extraordinary features, one of which is gastronomy. Sardinian cuisine is an expression of the land and its many facets, not only the physical environment and conditions, but also its isolation with respect to the Italian mainland, its culture and ancient traditions.

The Sardinian diet is healthy and balanced, contributing, along with a strong genetic predisposition, to the longevity of its population. The number of centenarians, in fact, is twenty times higher in Sardinia than in the United States. Sardinian dishes are simple, made with fresh ingredients produced locally, in accordance with the natural seasonal calendar. These are the products that the great chefs on the island use, to express the essence of this remarkable Italian island through its cuisine. This piece is not only dedicated to products, but to the special people that, behind the scenes, research, experiment and create the delights we find on the table.

Our culinary journey begins in Cagliari, the capital city, on the south coast of the island. Cagliari is home to the famous chef, Luigi Pomata, owner of a restaurant of the same name in Viale Regina Margherita, overlooking the seafront. Pomata is known as the “Tuna Chef”, offering a range of dishes based on the fish, reminiscent of the ancient tuna tradition on the island of San Pietro, often called Carloforte, where Pomata has his ancestral roots. Carloforte is an important tuna capital, each year holding an international food festival, called Girotonno, dedicated to the fish, where the Pomata family runs another restaurant, “Da Nicolo”, named after Luigi’s father.
Luigi Pomata became a household name in Italy after taking part in a television programme presented by Antonella Clerici, an Italian version of Ready, Steady, Cook. Pomata has a string of awards, including first prize at the Art of Menu, second at the Gualtiero Marchesi Award and second at the San Vito Cous Cous Fest. With experience abroad and the influence of renowned national and international chefs, Pomata’s cuisine is a mix of tradition and modernity. One of his most acclaimed recipes is fillet of bluefin tuna from Carloforte with red onion and Cannonau sauce.
“I am passionate about traditional cuisine in Sardinia, and just add a pinch of folly without, I hope, ever going over the top” – Luigi Pomata

Our next stop is in the small town of Siddi, in the heart of the Marmilla area in the province called Medio Campidano. The restaurant is S’Apposentu di Casa Puddu, of the celebrated chef Roberto Petza.

S’Apposentu in Sardinian is the room where guests are received and traditionally welcomed, in this case in a stately Art Nouveau style building from the early 1900s, previously the most important bakery on the island in the 1950s.
Appropriately named, the restaurant has a warm and welcoming atmosphere, full of history and traditions. Michelin starred for the third consecutive year, and awarded the prestigious “Three Forks” by Gambero Rosso, its highest prize, Petza receives one award after another. With many years of experience, his philosophy of cooking with natural ingredients produced locally as well as his considerable creative flair, Petza is a truly great artist. One of his revered recipes is artichokes with home-produced ham and creamed pecorino, or sheep’s cheese.
S’Apposentu di Casa Puddu is not only a restaurant, but also a cooking academy, directed by Petza, where aspiring chefs have the opportunity to learn the skills and techniques of the trade. Young talents who went on to open their own restaurants include chefs Roberto Serra and Manuele Senis.
Roberto Serra, chef of the family restaurant “Su Carduleu” at Abbasanta, in the province of Oristano, was also trained by chefs of the calibre of Bruno Barbieri, famous for his role as judge on Masterchef and Gianfranco Vissani, two Michelin-starred since 2007. Su Carduleu serves contemporary Sardinian cuisine with traditional flavours and choreographic dishes.
“100% Sardinian, with the utmost respect for producers, products and, above all, the land where I was born” – Roberto Serra
Manuele Senis, another young talent, is chef at the fish restaurant, “Ittiturismo Fradis Minoris” on the beautiful lagoon of Nora, in the town of Pula. The concept is modern cuisine based on fish from the lagoon, fully respecting the environment and marine biodiversity.

Our gastronomic journey ends in Portoscuso, in the Sulcis Iglesiente area on the south west coast. The Michelin starred chef Gianluca Vacca runs a family restaurant, “La Ghinghetta”, next to a characteristic Spanish tower with views over the sea. Vacca is the only other chef in Sardinia, together with Petza, to have been awarded the prestigious star. Ex-student of Sergio Mei, maestro of Sardinian cuisine and executive chef at the Four Seasons Hotel in Milan, Vacca combines tradition and imagination, simplicity and good taste, a winning formula given his success. Among his most famous recipes, noodles with Turri saffron, tuna and tuna roe.
There are other outstanding chefs in Sardinia, on equal standing to those mentioned above. These notable talents include Stefano Deidda, from the “Dal Corsaro” restaurant in Cagliari, Elio Sironi from “Madai” in Porto Cervo and Achille Pinna’s famous “Da Achille” restaurant in Sant’Antioco.
Whether in towns or villages, many restaurants in Sardinia have exceptional chefs. For gourmands and foodies, or those in search of culinary experiences, the island has much to offer. Excellent products in the skilled hands of creative chefs who combine tradition with modernity add a further dimension to exploration of this enchanted isle.