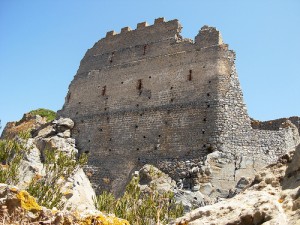 At the beginning of the next century, with the decline of the dominion of Pisa on this part of Sardinia, Acquafredda passed to Aragon for nearly a century before being almost completely abandoned in the XV Century.

Castle of Acquafredda, for the great historical and natural value of the building and the surrounding area, gained the reputation of natural monument. The area is now called Domo Adesitico Acquafredda. This particular focus on natural resources, landscape and archaeological treasures, makes this site an extraordinary destination for trekking and hiking lovers. In the beauty of his landscape is not rare to meet a wide variety of wildlife, including some native species. Do not miss the night climb to the castle.

Acquafredda Castle is located 256 meters of height above sea level. The site is near the City of Siliqua situated halfway between Cagliari and Iglesias, on State Road 130 that connects the two centers of Sardinia.