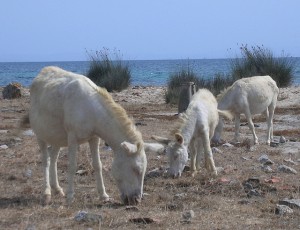 Along the coasts of Sardinia there are many small islands, with a rich history. The island of Asinara is one of them, located between the Sardinian Sea and the Sea of ​​Corsica.With its characteristic elongated shape and very jagged coasts, this island covers an area of ​​about 51 km and has a hilly area largely covered with maquis.

During the ancient Rome age, the Sardinian island of Asinara was known as the Herculis insula (“island of Hercules”) and it was considered a benchmark for all sailors who wanted to reach Sardinia. Before becoming a national park with animals threatened with extinction as the white donkey and some types of wild sheep, this territory has experienced a long periods of discomfort.

Due to its proximity to the coast of Sardinia, the island of Asinara was used as a shelter for sick persons in quarantine. During the First World War, it became a prison for soldiers of the Austro-Hungarian Empire, and during Seventies it became a maximum security prison.

After all these “dark years”, since 1999 the Isle of Asinara is returned to its former glory, allowing tourists to explore the beaches and the rugged coastline, and to admire the fauna, reserved only for guided tours. The island of Sardinia awaits you with its history and its unforgettable landscapes.