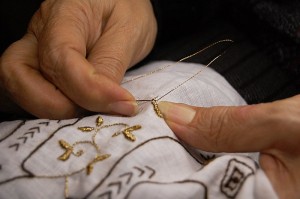 The silky filament which the Pinna nobilis, a species of saltwater clam, uses to attach itself to the seabed is known as byssus. Who first took this byssus and used it as a fabric via a process of spinning and weaving is not known, nor is when this discovery took place, but this ‘sea-silk’ has a long history, and is even mentioned in the Bible!

What we do know is that this ancient craft still survives today in Sant’Antioco (an island just off the south-western coast of Sardinia), where Chiara Vigo, the only master sea-silk weaver in Europe, continues to expertly search the seabed for byssus and weave it into all sorts of fabrics and items of clothing. 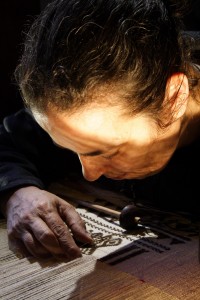 The art was passed down to her from her grandmother together with a sacred oath to never sell or commercialise the sea-silk in any way. They believe resources that come from the sea should be the property of all, just like the sea itself.

The products, therefore, are priceless in more than one sense of the word! Either woven by hand, or using a loom, they can be gifted only for very special occasions, such as weddings or births, and are also used for certain vestements and royal garments.

Anyone who wants to find out more about the history of sea silk can go to the Byssus Museum in SantfAntioco, where Chiara Vigo welcomes tourists, school children and anyone else interested into her workshop, to demonstrate the magic of this ancient craft.