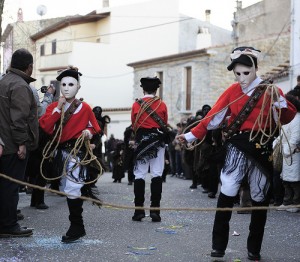 During the Carnival in Mamoiada, in the province of Nuoro, the streets of this city are traversed by a picturesque procession, composed by two typical masks: the Mamuthones and the Issohadores. Two masks indissolubly linked together.

The mask of Mamuthone (visera in Sardinian language) is totally black, with black sheepskins to cover the body of the person and a long string of cowbells tied on his back. Instead the mask of Issohadore is white (visera crara), with black berritta (the traditional Sardinian cap), red bodice, wide trousers and leather boots.

On the occasion of the Carnival in Mamoiada, these two masks parade through the city: the Mamuthones are divided into two parallel rows of six people, while the eight Issohadores “guide” the Mamuthones as if they were a sort of herd.

These two groups move in unison, as during a dance. The steps of the Mamuthones are slow, heavy and they have to shake the cowbells tied on their backs at the same time; instead Issohadores are much more free and agile.

And during the procession, launching sa soha (“lasso” in Sardinian language) the Issohadore catches and gently pulls towards himself the young women of the crowd, a sign of good luck and fertility typical of the Carnival in Mamoiada.