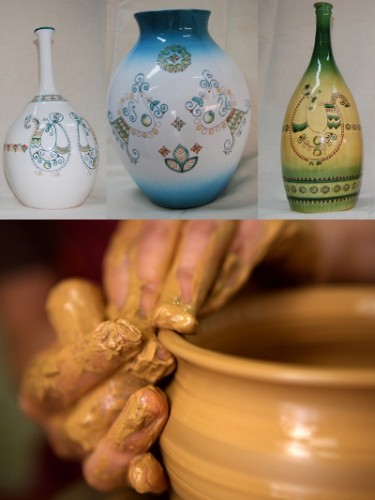 Pottery has an age old tradition in Sardinia, the most important archeological museums of the island treasure remains that date back over 5,000 years.  The production of everyday objects has passed from the expert Nuragic hands to  those of the Punic, Roman,  Medieval civilisations, but only became significant in 1900.

To this day,  this ancient craft is a fundamental element of Sardinian heritage,  one has to thank  local artisans; their passion and enthusiasm have kept  it alive and it’s a joy to see the infinite assortment of beautifully hand-made plates, jugs, lamps, ashtrays, coffee cups, saucers  in the shop windows. The decorations are mainly based on the local fauna  often depicting a lapwing, I find the  patterns  very delicate and usually in “mild”  colours, giving an overall effect of  quiet elegance.

The cities and villages that boast a long tradition in the world of  pottery and ceramics include Oristano, Pabillonis, Dorgali, Sassari and Siniscola, though the greatest production is concentrated in Cagliari,  in particular in Assemini, where skilled pottery masters which have received endless lists of awards at national and international competitions, still display their magical ability at the potter’s wheel.

There are different colours and glazings, according to the area. Pottery produced in Assemini, Oristano, Siniscola and Dorgali is distinguished by the colour yellow or green. Whereas Cagliari, Cabras and Sassari usually depict gorgeous majolicas.

The real bewitching  moment is the time of creation,  to my eyes the artisan  really does become a magician as he manages to tame the potter’s wheel and  make these wonderful creations of  unique shapes and sizes. It all looks so easy!

The pottery technique in Sardinia  still follows that of the seventeenth century which was spread all over the island during the Spanish domination.The material used is mainly terracotta,  due to the literally huge presence of  clay in the island. The choice of the right type of clay is crucial, as it will determine the quality and characteristics of the products. Production techniques, practically identical in all the areas of the island, vary in accordance to the kind of object that is being made; some are made with the potter’s wheel, others with a mould. The ovens, glazings and instruments for the clay making are basically the same throughout Sardinia.

In pottery making, the drying stages are essential, both the initial stage and the subsequent firing, when it is put in the oven. The first phase is crucial and needs to be done very slowly and thoroughly  in order to avoid any cracks or warps to the  clay when it will be placed in the oven.  The second stage, that of placing the newly made object in the oven, is called bisque firing. In this process the clay becomes waterproof ( otherwise it would melt if placed in water) and is again a delicate moment;  thus done slowly to avoid the pottery any “thermal traumas” which would result in the lethal and dreaded cracks.   Once, this operation took place in a wooden fire oven, now they have practically disappeared because considered too risky, (due to the  sometimes uneven temperature) and slow. Electric ovens are often the modern and practical solution, though different ovens have different results.

Glazing makes the terracotta  watertight, (crucial for cups, vases..etc), the pieces are usually dipped in  or painted with the glaze.

This is a very brief outline, as the nuances are infinite and obviously result in very different effects, quite amazing if one thinks about it.

There are many places where one can experiment this beutiful craft, I am writing the address of a centre in Cagliari and Carloforte which organises  8 lessons:  http://www.ceramiche-artistiche.it/corsi-ceramica.html

another is in Nuoro: http://www.unicaarteceramica.it/

An idea for a  different way of spending a holiday which should be fun!