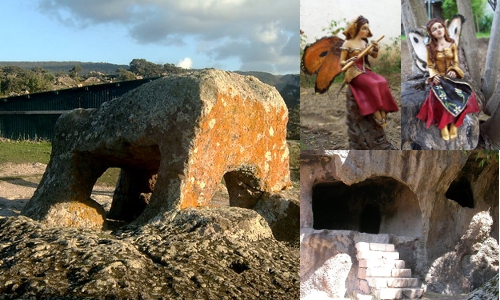 The  Janas are imaginary creatures of the Sardinian popular tradition, tiny women with a volatile temperament, a bit  witches and a bit fairies, both kind and naughty. Much smaller than humans, in some way they make one think of a Sardinian version of female elves. By no means spiritual creatures, but demons in the Greek meaning , in other words beings between the human and the divine sphere. Their tiny size allowed them to live in the “Domus” which are smaller than normal houses built in the rocks.   This is obviously a Sardinian legend which combines these magical figures with the millenarian stone lodgings and  sounds just like the beginning of a fairy tale.  The Domus are in truth caves dug in rocks by  ancient Sardinian civilisations over 5,000 years ago,  there are many spread all over the island,  from Cagliari all the way up to Santa Teresa di Gallura.

HOMES OF THE DECEASED
As I’ve just mentioned, the Domus were funeral caves dug in the earth, or better rocks, by Sardinians  in order to bury their dead. The caves were situated next to each other in high numbers, forming  necropolis that could host over a hundred bodies. The corpses were deposited in a fetal position alongside their belongings believed necessary for their journey and afterlife.  Many believe the bodies positioning in the caves occurred in a second moment and that  the bodies had been previously left in the open to “de-flesh” and when only the skeleton remained, were placed in the small caves.
“Domus” in Latin means house and in fact the “Domus de Janas” are the exact smaller version (more or less half the size) of the real homes of these ancient people; the dead too had  a house to live in. There was in fact a strong belief in a rebirth, the bodies were painted with red ochre as the colour red represented blood  which would bring one back to life.

THE ANCIENT OZIERI CIVILISATION
The cult of the dead has always been a fundamental characteristic in primitive cultures. This is how it was in Sardinia.  After the  discovery of some significant remains in a large cave called san Michele  in Ozieri,  in the province of Nuoro, historians came to the conclusion that the  Domus de Janas culture belonged to a population that had nothing to do with the other previous cultures. The traces revealed a way of life and housing that was totally different. Thus, this civilization was named  the culture of Ozieri or  the culture of San Michele.
The population probably dates back to 3,500 B.C, a peaceful and laborious people no longer dedicated to sheep farming but to agriculture. Their religion was  based on nature and its many manifestations. The  Sun and the Bull were worshipped and represented male strength and fertility, whereas the Moon represented the female “Mother Goddess” .

SANT’ ANDREA PRIU
Visiting these necropolis is a really interesting experience, as not only are they  extraordinary monuments, but they also portray how the houses of these 5,000 year agricultural populations were. The most beautiful and bewitching is in Sant’Andrea Priu, near Bonorva roughly 50 km east of Bosa and 5o km south of Alghero. The necropolis reigns over the quiet and vast plain of Santa Lucia, dotted with houses and sheep, and is set in a trachyte hill.
Going to see the many “rooms” of these  spectacular house caves  in sant’Andrea Priu is quite captivating. One of the domuses was transformed into a church in Bizantine times, here one can admire some beautiful frescoes (restored in 1997) and see the old  narthex (the  church lobby  for those not yet baptized )  and the presbytery with the altar.
The last surprise is  a large rock  similar in shape to the body of  a bull. There are discussions as to whether the rock shape is natural or  artificially created. It remains a mystery. The “bull” lacks a head, and there are various theories on the subject, as it is thought that a wooden or clay one was placed during celebrations, but another  hypothesis is that the bull’s head had been cut off by the Christians.