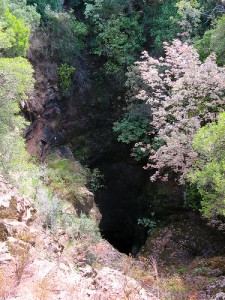 The chasm Golgo Baunei or Su Sterru: it was 1957 when the young Italian caver Umberto Pintori touched for the first time the bottom. Legend tells that the venture stress cost him his hair color. Even older legends tell that the origin of this amazing chasm, the deepest of its kind in Europe, is to be traced back to a battle between St. Peter and an evil snake which infested the neighborhood of Baunei. The saint threw the reptile to the ground with such force to create the chasm we see today. In memory of this fight, close to the abyss of Golgo, a church was erected in honor of St. Peter.

The natural sinkhole phenomena produced by underground karst swoops down for 275 meters, elliptical mouthpiece after 25 meters wide at the widest point, characterized by basaltic rocks.

The pit Golgo Baunei can be reached by continuing north village As Piscinas above Baunei Golgo plateau. The road to the church of St. Peter’s part directly from Baunei and can be followed in the car (steep road) for 5 km. At the fork, you will have to take the road that goes straight for 2 km, up to a detour that takes you directly to the right near Su Sterru.