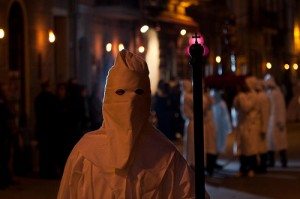 At this point begins the “historical” part of the procession: Is Vexillas, two large painting cloths with the most important moments in the life of Jesus; Joseph of Arimathea and Nicodemus, who deposed the Christ in the tomb; two anonymous servants carrying the ladder for the deposition; two children representing St. John and the Magdalene; and finally the stretcher with an ancient wooden statue of Christ, followed by the Addolorata.

And the Procession of Descenso during Holy Week in Iglesias is attended by the Germans of the Arciconfraternita, strictly covered by a white dress with a hood of the same color.