Islands in an island. If Sardinia has maintained its ancestral traditions due to its isolation and insularity then  Sant’Antioco and Carloforte even more so and are super, extra characteristic. Situated in the southwest of the island, these small islets have managed to keep the originality and authenticity of their culture and values. Sant’Antioco and Carloforte are  by far a different tourism. 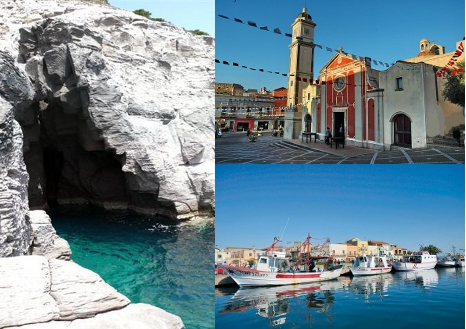 This islet, located in the province of Carbonia-Iglesias, is accessible by road, as a few years ago a bridge was built linking it to Sardinia’s main island.This has reduced the distance considerably and it doesn’t feel at all as though  you are crossing the sea to another  island. Sant’Antioco  is one of the most picturesque locations with some of the oldest  history of  all of Sardinia.  In fact,  inhabited in the prehistoric period, it  maintains important remains of all the civilisations that have passed through it. Dating back to Punic and Phoenician times, there are remains like the   “Tophet”, a children’s graveyard belonging to the Phoenician era (approximately VIII B.C), or some remains of  the walls of the Necropolis of the Punic period. Sant’Antioco, very near Tharros,  became one of the most important hubs of its time, in particular due to its commerce and artisanry. One can go and see some very interesting exhibitions on the period in the Archeological and historical museum of the town, literally a must see in order to understand the history and evolution of this enchanting islet.

After the Punics and the Phoenicians came  the Romans. There are extraordinary  traces regarding the life and customs of this glorious population which are still visible today, like for example, the remains of the amphitheatre, the ancient Roman bridge or the amazing catacombs of the church of Sant. Antioco, dating back to the Phoenician era and was later rebuilt in the Christian period.  In order to see and feel these wonders (and much more) for yourself, the islet is definitely worth visiting, particularly as you will also come across the heart warming hospitality of the people and  the extraordinary food, always appreciated..

Furthermore, if you have time visit the rest of the islet,  passing through the road that links it to  Calasetta, another picturesque  locality, from where one can take the ferry to the nearby Carloforte. During the journey, one  can admire the breathtaking beauty of the environment and the beaches, observe how unspoilt and untouched by man some areas are, making Sant. Antioco one of the most genuine destinations of the entire island. 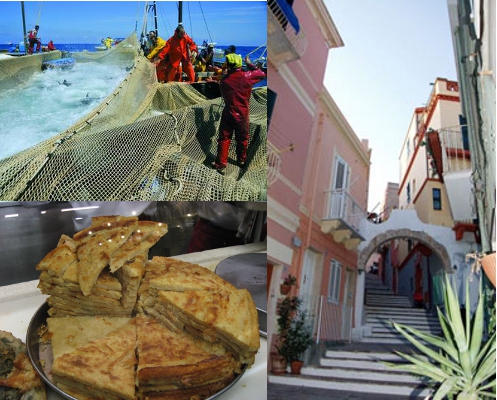 Carloforte, also known as San Pietro,  is another small island  located a little north of Sant. Antioco. It is reachable by ferry from  Portoscuso, in Sardinia, or from Calasetta in Sant’Antioco. The journey lasts between 20/25 minutes.

Any tourist coming here for the first time will immediately realise how different this island is from the rest of Sardinia. It can be felt through all aspects, the culture, alleyways, gastronomy, traditions and even the language spoken by the locals. In fact , Carloforte was founded by  the “Tabarka” a  Genoese colony located in northern Africa, which moved to Sardinia around the second half of the  18th century as relations with the neighbouring Arab countries had deteriorated and the Italian King Carlo Emanuele di Savoia (thus the name Carloforte)   was eager to colonise the then uninhabited Sardinian land.   The locals speak a Genoese dialect that originates from the Tabarka and is particularly musical and cheerful.. lovely to listen to!

The food is very similar to that of the Liguria region (where Genoa is located)  but mixes components and recipes from northern Africa, for example, cascás, is a variation of the African cuscus (but made solely with vegetables that are cooked separately), and many  dishes belonging to the Genoese tradition have undergone various modifications and additions, that  of tuna especially, as this fish is one of the features of Carloforte. For over a hundred years in fact,  the famous “mattanza dei tonni” in which tunas are fished and killed, takes place here the very first days of June. It has become a major event with a variety of initiatives  including the “World Tuna Cuisine Competition”. The mattanza in  itself , though a fascinating  fishing “documentary”, is not  a sight for all,  but the other events and the fresh tuna in all its cooking variations are absolutely unmissable.   Another speciality   one must try is the “ceciata” a very tasty sort of focaccia (but not really..) made with chick pea flour, olive oil and water and bright yellow in colour..an absolutely delicious quick snack to relish whilst waiting for a lovely supper, also originating from the Genoa (and Pisan) culinary tradition.

The village is particularly elegant with lovely pastel colour and beautifully kept buildings in art nouveau style. Pretty arches, steps and alleyways are characterised by wrought iron balconies adorned with flowers hanging from their pots.  The air one breathes here is quite special, the rhythm of everyday life  by far slower and more relaxed, with very little traffic and locals animatedly chatting in the streets  whilst sitting on their chairs, front doors left unlocked.… come and see for yourselves.

If you happen to find chick pea flour, here follows the recipe for ceciata..very easy.. the only tedious part is having to leave the batter to rest for a while.

Ingredients
A  deep  baking tray   of  28 cm
100 g / 3 ½ oz  chickpea flour
300 g / 10 ½ oz  water
1 tablespoon olive oil and more to grease the baking tray
salt
pepper
In a mixing bowl mix the  water with the chickpea flour until it becomes a smooth batter without any lumps. Cover the bowl with a dish and leave to rest for at least 3 hours
Preheat the oven at 250°C gas mark 5.
Add oil, salt and pepper to the batter, whisk thoroughly until very well blended.
Grease the baking tray generously  and pour the batter in it.
Bake at 250°C  / for 30 minutes and then for another 30 minutes at 200°C , until the crust is golden brown and the inside is done.
A 28 cm diameter  baking tray  makes the ceciata fairly  thick in diameter. For  a thinner version, simply use  a lower baking tray.