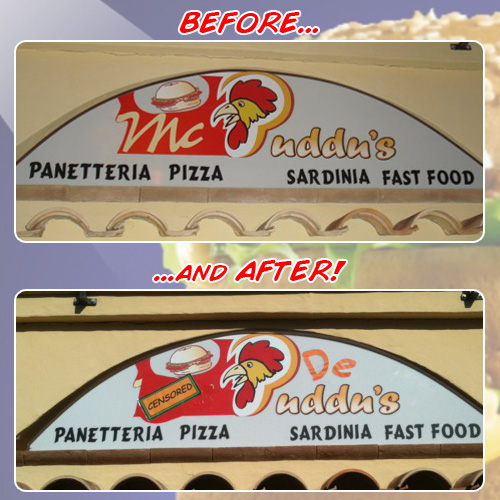 Can a famous multinational like Mc Donalds caution a young entrepeneur of the small Sardinian village of Santa Maria Navarrese ( located between Baunei and Tortolì)  from using the suffix “Mc” for his activity? Apparently so! This is what happened to Ivan Puddu, owner of Mc Puddu’s and of Mc Fruttu’s, the first a fast food serving typical Sardinian menus at low prices, the second specialized in fruit shakes and drinks made solely with the island’s produce.

The letter
Mc Donald’s lawyers are not in the least happy with the MC suffix as they argue it might cause confusion amongst clients. The 32 year old entrepreneur  defends himself by stating that the M stands for “malloreddus” (a small Sardinian pasta type) and the C for “culurgiones” (Sardinian ravioli) which belong to the typical Mediterranean diet and have nothing to do with Mc Donald’s food. But Mr Puddu obeyed and promptly covered the two incriminating letters with a provocative “CENSORED” label and added the undoubtedly more Sardinian “De” suffix to his surname.” There’s no way I can afford a legal battle against this colossal brand” he states.  Though the Regione Sardegna stated its willing ness  to assist Mr Puddu should the need occur.
The reaction
The American food giant’s caution has kicked up tremendous publicity, not to mention customer support for the current CENSORED De Puddu all over Italy. The young entrepreneur definitely deserves a prize for his creativity and clever marketing that has managed to highlight Sardinia’s simple and genuine gastronomy.