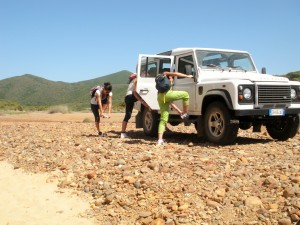 The tour travels to all the most important mining towns in southern Sardinia, using 4x4s to give easy access to everything the region has to offer. Many other points of interest are also visited along the way, and the surrounding scenery is simply stunning. It is much like travelling back in time, driving through forests entangled with the abbandoned ruins of mining buildings, places of hard work in stark contrast to the magnificent 19th century palaces built for the mine owners. The tour travels through the town of Gonnosfanadiga, famous for its olives, bread, sausages and desserts, on to Montevecchio, the first main stop and once one of the most productive mines in the whole of Sardinia. Then we take a dirt track that skirts around the valleys of Linas, heading towards the sea. We pass through the mining town of Ingurtosu, a 19th century village now semi-abbandoned, much of which is lying in ruins, and travel on to Naracauli, where the remains of the Brassey Refinery lie nestled beneath steep, rocky walls. The refinery is both shocking and fascinating, giving visitors the eerie sensation of being in a ghost town, completely empty and yet teeming with voices from the past. 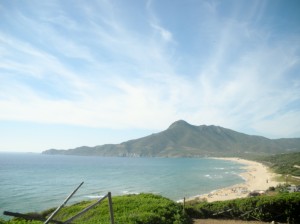 The tour continues on, and soon the dunes of Piscinas appear on the horizon. The dunes of Piscinas stretch as far as the eye can see, and their intense golden glow is perfectly offset by the clear waters of the Mediterranean. In fact, they are among the most extensive dunes in Europe, and have been recognised by UNESCO as a world heritage site. The sandy environment allows otherwise rare plantlife to thrive, and the beach boasts juniper trees that enliven the atmosphere with their lovely scent and provide much needed shade during the hottest hours of the day. Here visitors can have a swim, relax on the beach and enjoy su smurzu, a traditional Sardinian snack made up of civràxiu, a special local bread, cheese and cold meats.

The tour then gets going again, and heads off for the other beautiful beaches of the Iglesiente (the area of coast near the town of Iglesias). We travel along a road with wonderful views through the unfortunately named village of Buggerru (actually pronounced BU-JEH-ROO) on to Cala Domestica, a wonderful bay of soft, white sand strewn with the odd rock or area of shingles and enclosed by soaring great white limestone cliffs. Cala Domestica is a truly breathtaking place, wonderful for swimming and surrounded by wild, uncontaminated nature. The beach is also home to the remains of a number of old mining warehouses, giving it that extra bit of charm and fascination.

The final stop on the tour is the small mining village of Nebida, that has now been converted into a small tourist attraction. Nebida boasts a wonderful terrace which commands views over the entire gulf and all the wonders of the area. You can see five stacks, one of which, known locally as the Pan di Zucchero (Sugar-Loaf) due to its colour and shape, is the highest of its kind in Europe. Another sight visible from Nebida is the Lamarmora Refinery and nearby mining village, seen nestled on the almost-purple cliffs, a stone’s throw from the turquoize sea. 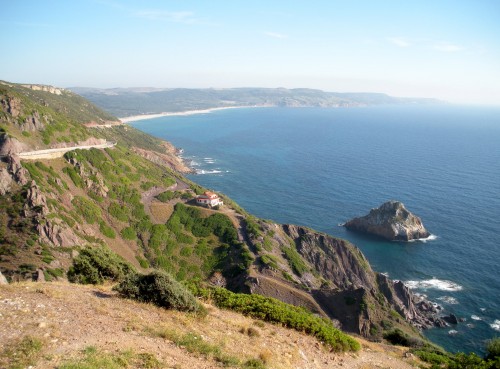 Lugori …ideas for your free time…