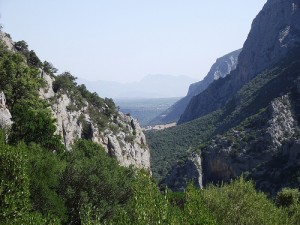 The nuragic village of Tiscali is in the valley of Lanaitto in Sardinia, more precisely, between the town of Dorgali to Oliena. The village, nestled in a valley, stands atop Mount Tiscali and is considered one of the wonders of Sardinian archaeology.

At the nuragic village of Tiscali you get by following the paths belonging to coal miners through suggestive woods of oak. The village is hidden in a cave very charming, that had a double major function: on the one hand allowed the villagers to remain hidden and protected from external attacks, on the other through the large window at the top, a real cleft of the mountain, to allow residents to control the valley.

The forty huts that make up the nuragic village of Tiscali are mostly rectangular and circular, and some of them kept inside, very rare and precious testimony, even the wooden lintel of juniper.

The origins of the nuragic village of Tiscali remain unclear. It is likely that its construction coincides with the conquest of Sardinia by the Romans, while it is certain that the village has been popular for a long time, as the remains dating back to medieval times.