My fascination for churches and cathedrals dates back to my teens, I remember avidly listening to my History of Art teacher describing the architecture, sculptures, paintings and frescoes of these marvellous and in many ways miraculous buildings. I would observe the beauty of every detail with fascination and awe, marvelling at the artists’ mastery …asking myself how they could have reached such perfection..and all those years ago.
Sardinia has an extraordinary number of churches strewn all over its territory, their style and architecture cover a variety of historical periods; Byzantine, Romanesque, Baroque to name the most important.
The most striking feature is that these unbelievable works of art are often situated unequivocally “in the middle of nowhere”, they are surrounded “by nothing”, simply open countryside and fields, the nearest living presence is that of the sheep delicately grazing nearby. They appear like a vision, unexpectedly, a bit like finding a pearl in a mussel…so to speak..

Here I am concentrating on the Pisan Romanesque churches and alas…chosen only 4. The 4 churches cover a range of 100 km in the northern area of the island in the province of Sassari. Their order follows a specific itinerary, allowing them to be visited “en route”. 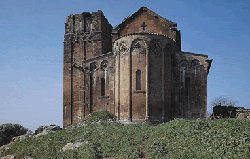 Let’s start with the Basilica di S’ant Antioco di Bisarcio, the Basilica was built in two distinct periods, initially constructed in 1065, it was severely damaged by  fire and rebuilt a hundred years later in 1153. It is in red trachyte, and rises majestically on a hill in the open countryside on the outskirts of Ozieri.
The basilica has amazing architectural details, with beautifully decorated capitals and arches.

Second on the list is the “ Basilica di Saccargia” situated 38 km northwest of Ozieri and 20 km below Sassari. The Basilica is undoubtedly Sardinia’s most famous, you will find it in brochures, books, booklets..you name you have it. It too literally appears amongst the fields and hills…the effect is quite breathtaking…a wonderful mixture of black basalt and white limestone.

The name Saccargia is said to derive from S’ acca argia” a cow with a dappled coat also engraved in the porch’s capital at the church entrance. Inside is just as spellbinding and a milestone of Romanesque art and architecture, particularly the rare series of Medieval frescoes depicting the life of Jesus in the apse. 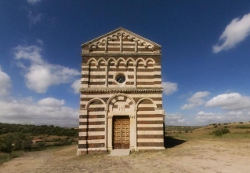 Next is San Pietro in Simbranos in Bulzi, 38 km north of Codrongianos on the S 672 superway. Though much smaller, this other gem has similarities with the Saccargia Basilica, as it too is in black and white, situated in the midst of a deserted countryside. The elegant church is full of ancient Medieval symbols, the light shadow effect, decorations, architecture aren’t left to chance and although impossible to understand, their overall effect is definitely harmonious and holistic. 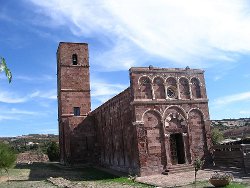 Last but by no means not least is the monastery “Santa Maria di Tergu” in the village of Tergu, 50 km north of Codrongianos on the SS131 superway, past Sassari and just under Castelsardo. The monastery is another glorious example of Romanesque architecture and like the Basilica in Ozieri, it is built in slabs of red trachyte and has white limestone decorations. For many years it was contested by three villages (Osilo, Nulvi and Castelsardo) and in order to demonstrate their possession, each village built a separate door allowing direct access to the church. These doors still exist and make this church quite unique, so look closely!