Roasted, fried, au gratin, in tomato sauce, in wine , with fregola pasta..these are some of the snail delicacies that will be served at the snail festival of Gesico, a small country village in the outskirts of Cagliari in southern Sardinia. 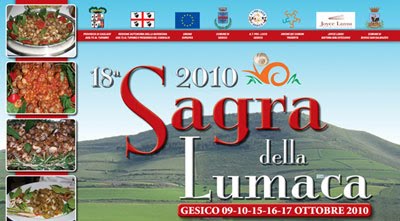 The dense snail population of the Gesico countryside has brought about the creation of snail farms that have turned the village into a “Snail capital”. Gesico was in fact nominated the “City of snails” in a national snail farming event in 1997 and is now part of the 12 Italian cities where snails are the local and characteristic product.
Here, every third week of October, the renowned “Sagra della Lumaca” or snail food festival takes place. Introduced in 1993, this year is the 18th edition and it occurs alongside the religious celebration in memory of an African Bishop “Sant’Amatore Vescovo” martyred in Gesico at the beginning of the VI century .
Snail lovers can eat their heart out and choose their favourite recipe….but non snail eaters needn’t worry as there is a lot more going on, like for example, the Agricultural exhibition of the Trexente area where a variety of local products are put on display, as well as an exhibition of sacred art, book presentations , music, shows…lots of unmissable fun and folklore!

Events  will take place in the “Centro Servizi  S’Ulivariu”,  in the Piazzale S. Amatore, the “Casa Schirru”  and Piazza Umberto on   the  09th-10th-15th-16th and 17th  of October.  The Snail Festival is on Saturday 16th of October.

FRIDAY 15TH OCTOBER 2010
16.00/18,00 In Piazza Umberto I° :
16th “Snail race..the final… and prize for the winner!”-  Children’s event.
18.00 At the Elementary school:
inauguration of the 17th Agricultural Exhibition of the  Trexente area- a series of  stands will exhibit typical  Trexente and Sardinian products.