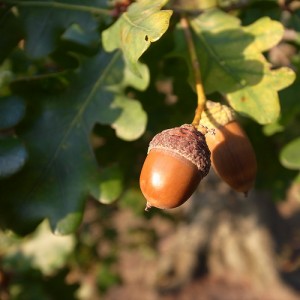 From folk Ogliastra traditions, the acorn bread represented for century a poor’s food, because it was made of low-quality ingredients. Nowadays, we can state that this simple food supply of the days gone is characterized by high organoleptic quality and nutritional values, supporting what folk wisdom knows from long time. The first reference to the acorn bread (Su Pan’ispeli), as Sardinian typical food, comes from Plinius the Elder (I century a.D.).

As all concerning traditional products, what ensured livelihood on earth, acquired sacral transcendence and was treated with the highest form of respect known by manhood: the rite. Respect and know how. The very ritual actions had the function to pass on the know how about acorn bread production, marking the timing of mixing acorns, clay, cinder and water.

Dried acorns was beated upon a stone, in a sack called “sa taxedda de pistadorgiu” (made of goat wool), and then mixed with clay and water. The mixture was cooked on fire and cooled down in the shape of bread.

Unfortunately, nowadays the acorn bread isn’t produced anymore. But the memory of it is still alive in the surrounding of Baunei and in the Ogliastra area of Sardinia.