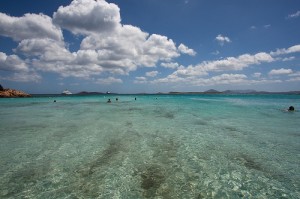 Few people know that Sardinia landscapes have been the location for film masterpieces that are considered cults of the world cinema history. The wild and untouched nature has been the set of Swept away destiny in the blue sea of ​​August, the most representative film of the director Lina Wertmüller in 1974. The film was shot along the East Coast of Sardinia, in the province of Nuoro. The beach where the two castaways landed  is Cala Fuili, near Dorgali.

The famous scene where the protagonists Massimo Giannini and Mariangela Melato roll around on a white sand was filmed in Cape Comino, a stunning location in the town of Siniscola, while Arbatax, in Ogliastra, is the location of the scene of the helicopter.  Same set for the remake filmed in 2002 by Guy Ritchie: Swept away, starring Madonna.
Director Wertmüller had an illustrious predecessor in love with Sardinia landscapes: Michelangelo Antonioni filmed in this island a lot of scenes of Red desert, his first color film. The film will win the “Nastro  d’Argento” for Photography:  the scene of the dream was filmed on the beach of Budelli.

Also the most famous British spy James Bond landed in Sardinia. We are talking about the film Agent 007 – The spy who loved me, directed by Lewis Gilbert, starring Roger Moore, the tenth film in the saga. The film had three  Oscar nominations in 1978, including the  Award for best art direction by Ken Adam.
The film was shot mostly in the beautiful resort of Cala di Volpe Bay. And the frequent chases in films had Porto Cervo and San Pantaleo, Olbia region, as their location.

Sardinia landscapes revealed once again a real gem in terms of locations, a real tour of postcards and pictures.