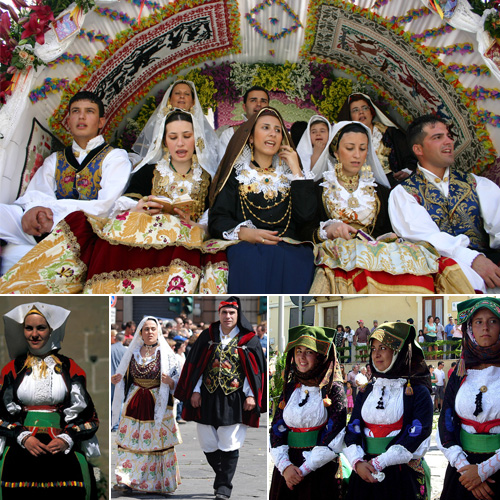 If you ever happen to attend a Sardinian procession, one of the most striking features is the assortment of the traditional costumes of the island..particularly those of the women. A mere glance is by no means enough, a closer inspection is needed as it will reveal infinite variations in colour, textiles, decorations and shape of the skirts, headdress and bodices. Red, gold, purple, green, purple and red, green and gold… red and white… A succession of colours with flashes of gold ..Some very colourful costumes are from Oristano, take a look!

The origins of these costumes no doubt date back to the middle ages,  particularly in the inland areas where external impact was much less, whereas the coastal areas were  subjected to the Spanish influence.  The details to watch out for in the Sardinian female costume are the  bodice, the  skirt and the shawl, often worn over the head. Jewellery plays a very big part too, but that’s another story..
These components  have their countless variations according to the area, use and social extraction.

Sometimes the costumes could be very be misleading, to say the least. Widows costumes, for example, in some towns were far from black, they had  marvellously decorative green and gold bodices. The shawls and scarves were probably the most valuable piece of clothing, often the result of years and years of meticulous embroidery. Today traditional shawls are even more valuable as they represent an art that has practically disappeared.. I for one, am near to hopeless at most needlework.

Usually the costumes were two, one for every day use , the other for special occasions which were religious celebrations, the wedding day, harvest festivals etc. Costumes for everyday use were obviously more practical, they had big pockets and were easy to put on!With respect to the elaborate women’s dress, men’s every day costumes were easier to “transform” into special ones, a velvet rim on the collars or an ornament on the hat often did the trick.
There was a distinction between the rich and the poor as the rich (women in particular) often were dressed in dark red and other sumptuous colours made with dyes that came from herbs, their treatment to obtain the colours a precious secret, thus hushed, treasured and whispered to the next generation.
The poorer costumes were of “orbace”, a rough woollen grey cloth that hadn’t been dyed. As mentioned previously, Buttons and jewellery are important, they could be gold, silver or simply of metal.

The men’s costumes are characterized by some beautiful embroidery and have  different details but they’re not quite as evident (or as fun) as the women’s.
The men wear a shirt, white linen trousers, a waistcoat, a jacket or cloak, “carzas”  (black leggings covering shoes and trousers)  and a cape. The cape is the famous Sardinian “berritta”, a cylinder shape piece of cloth, usually black (sometimes red) that is either folded on the head or simply falls back onto the shoulders.

OCCASIONS TO SEE THE COSTUMES “ LIVE”

The best occasions to see these extraordinary costumes are the religious processions that characterize all the Sardinian towns, though the most significant are the celebration of Saint Efisio in Cagliari on the 1st of May, the “Cavalcata di Sassari” in Sassari at the end of May and the “Festa del Redentore” in Nuoro, the last week of August. If you do  have the possibility to go,  read more about these glorious costumes first.  And once there, try and see if you can spot the areas, or the  poorer costumes for example….  the procession will come to life!