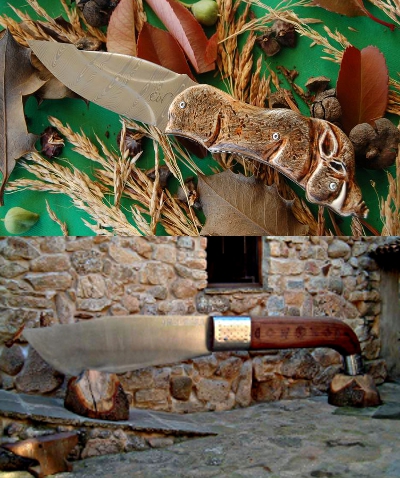 Very few are probably aware that in Sardinia lies a great tradition and art in the creation of knives. Once you start investigating, a whole new world opens out made up of different materials, styles, blades, transforming the object into a real work of art.
The knives are divided into two kinds;  la leppa, a knife with a fixed blade, and resolza, a folding knife. Another crucial characteristic comes from the shape of the blade, also in two kinds; the wide, rounded blade is used by hunters and called foglia di lauro (laurel leaf) whereas the thin blade used by shepherds is called foglia di grano (wheat leaf) .
So these are the fundamental aspects of all knives which go on to have infinite nuances. The Sardinian collectors’ knives for example,have finely cut, laminated and damacus blades, consisting in hundreds of metal sheets pressed together (damacus) creating a pattern that resembles fingerprints or wood. The handles are often made with the horns of  mutton, in the shape of a boar head, of a mufflon sheep, a dog.. extraordinary.
The main area where these small “works of art” are made is concentrated in the south west of the island, in Guspini and Arbus, roughly 60 km above Carbonia. Another very famous locality in the creation of knives is Pattada, situated in the north of the island in the”Barbagia”, the heart of Sardinia’s hinterland , between Olbia and  Nuoro.
The traditional Pattada knife is long and narrow and the handle is always made from the horn of a  mufflon sheep. Below is a photograph,in order to have a clearer idea.

A very famous creator of knives called Paolo Pusceddu is from Pattada, 15 years ago he broke the record for having created the world’s largest knife..it weighed over 80 kilos!! He later went on to build the world’s heaviest knife which weighs 295 kilos and is nearly 5 metres long..  You can go and see it at the knife museum in Arbus.
Another wizard in the knife world of Pattada is called Piero Fogarizzu, his ability lies in the very particular damacus blades which have made him famous worldwide. He designs “taylor made” knives and people have to wait  a long time before getting one. If you are a little intrigued by the Sardinian knife, below follows some important advice on how to distinguish the real Sardinian artefact.

1) THE HAND MADE KNIFE IS SIGNED BY THE KNIFE MAKER who manufactured it, the signature usually lies on the blade and is often the knifemaker’s surname or the pseudonym of a symbol.
2)  THE SARDINIAN KNIFE HAS NO SECURITY BLOCK OF THE BLADE,  this is very important; the blade is free, hand made knives do not snap open or as there are no strange opening or closing mechanisms.
3) THE HANDLE MUST BE IN MUTTON HORN.  In some cases there can be variations in  ox bone or some kinds of walnut, they can never be of plastic or resin.
4) STAY AWAY FROM CHEAP PRICES.  Remember you are buying a hand made knife, which means excellent quality and a unique item.  A 22 cm knife usually costs around 50 € (handle in ox).