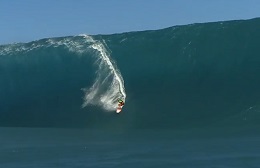 Some are calling it the heaviest wipeout in history. 27 year old Niccolò Porcella, Maui born and Sardinian bred, hit the headlines this week. From The Guardian to online surf magazines, the film of Porcella’s heart-stopping moment flooded the web, as he was swallowed by a huge wave, then churned inside it, in a monstrous spin.

A professional kite-boarder, big wave surfer, wing-suit flyer, cliff-jumping stuntman, it was his first trip to Teahupo’o in Tahiti. One of the deadliest swells in the world, Teahupo’o loosely translates as “sever heads” or “place of skulls”. Porcella, miraculously out of the tunnel, described his experience, “It was the most violent thing — I got annihilated. I was bounced, pinballed on the reef, the whole 9 yd. Just up and over and up and over. It held me under pretty long. My life vest got blown off right away, and then the second wave drilled me — I actually hit the bottom even harder. Hit my back, my knees, and then I got about four more waves on the head after that … washed over the reef.”
After spitting blood and recovering from a brief headache, he was seen paddling out for another bomb. Apart from his wedding day, Porcella enthused that this was the best day of his life.
Sardinia cannot boast the heights of Tahiti, but is nonetheless a haven for lovers of kiteboarding, windsurfing and wave surfing.Hotspots for kiteboarding include many beaches on the south of the island, where conditions are ideal for the sport. The capital’s town beach, Poetto, hosts international kiteboarding competitions, and La Maddalena spiaggia is also popular. Villasimius and Costa Rei on the southeast coast, with Chia and Porto Botte at San Giovanni Suergiu on the southwest coast provide ample choice in stunning locations. 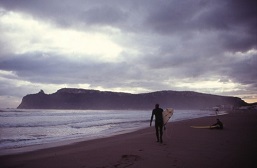 On the northwest coast, for visitors of Alghero and the area, beaches for surfers, windsurfers and kiteboarders include Speranza, Porto Ferro, Maria Pia, Mugoni and Porto Conte. Hotspots on the north coast are Isola Rossa, the bay of Marinedda and Vignola. Travelling further east, Porto Pollo near Palau is a mecca for windsurfing, kiteboarding and sailing, with ideal conditions and excellent facilities for the whole family.On Sardinia’s west coast, the isle of San Pietro is popular with surfers, then Guroneddu, near Porto Paglia and Fontanamare, where some claim the best waves in the Mediterranean. The west coast is wild and often windy, with sand dunes on golden beaches and great spots for surfing and windsurfing alike, such as Masua, Buggerru, Scivu, Piscinas, Porto Palma and Torre dei Corsari.
Further up the west coast, wave surfing is popular in San Giovanni di Sinis, Putzu Idu and Capo Mannu, hosting national competitions. For a taste of surfing and life in Sardinia seen through the eyes of a young American surfer with Italian roots, Chris Del Moro, see the Bella Vita film clip.

Useful links:
– Video of the wipeout
– Accommodation in Sardinia