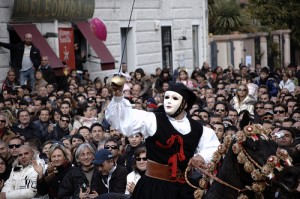 The Sartiglia of Oristano, one of the most ancient and typical events of the Carnival in Sardinia, is always a very awaited event: the edition of 2012 will be held on February 19 and 21, respectively the Sunday of Carnival and Mardi Gras.

The Sartiglia is a horse race that winds along a path remained unchanged for about one hundred years. And the most important moments of this authentic medieval joust are two: the Corsa della stella (“race of the star”) and the Corsa delle pariglie (“race of the spans”).

For the 2012 edition of Sartiglia of Oristano, the names of the two Componidoris (the two leaders of the races) are: Raimondo Carta for the Gremio of farmers, who will officially head the Sartiglia of February 19, Sunday; Antonio Murruzzu for the Gremio of the carpenters, who will head the race on February 21, Tuesday. And, as the tradition commands, the official date of their investiture is February 2, during the feast of Candlemas.

And as happened during the last year, the Sartiglia of Oristano 2012 will also be accompanied by Mediterranea, with its traditional exhibition dedicated to the productions of high quality of the food industry and the artistic craft.