Sardinia loves mistery, witches and spooky traditions are in fact an important feature of the island’s ancient heritage.
In the village of Aritzo, situated in the heart of the Barbagia (the very hinterland of the island, famous for the production of chestnuts and cherries) the old “Sa Bòvida” prison  has a museum dedicated  to instruments of torture and witchcraft. The museum is in the centre of the village, and rises on  a narrow flight of steps;  it’s an old building dating back to 1700 and  was  once used as a maximum security prison. It  is characterised by an underground passage of Spanish origin called “Sa Bòvida” (the vault). The museum is set in the many cells of the old prison and includes the permanent exhibition entitled “Bruxas”, covering all magic and witchcraft aspects between the XV and XVII century.  Here a  variety of objects belonging to religious, magic and witchcraft rituals introduce the visitor to the world of popular beliefs and the most terrible curses..eek.  A part of the exhibition also concerns the Inquisition and has a collection of instruments of torture used for centuries against the poor souls accused of witchcraft and curses.
The  Museum of Aritzo isn’t the only one of its genre, as in the province of Oristano, the small village of Bidoni, on the Omodeo Lake, hosts the Museum “S’Omo ‘e sa Majarza” (“The witch’s dwelling “). The museum, which is located within the old city Hall, rediscovers White and Black magic, as well as the legends of  mysterious rituals. Inside,  the visitor has the opportunity of travelling in time and see the “Malleus Malleficarum”, in other words  “the witches’ hammer”, an old Code published in 1486  used as a guide in all witchcraft inquisitions. Also in the museum is the representation of the Sardinian female figure “Sa Filonzana”, a woman dressed in black  holding a spindle symbolising the thread of life that can break at any moment. There is the  disturbing figure of the  “su carru de sos mortos”, a   cart of the dead which  in ancient beliefs would move by itself making a terrible creaky noise whilst transporting the dead. As it could only be seen by those who would die within the year, the mere mention of its name brought  fear and terror.
Even in  Castelsardo, the ancient Doria castle has all sorts of curiosities and myths linked to the world of magic. The Episcopal palace of the town has a series of permanent exhibitions dedicated to witchcraft, heresy, and inquisition and  here too is  an assortment of torture instruments used by the inquisitors to obtain a confession from anyone suspected of magic and witchcraft. 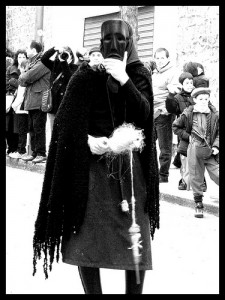