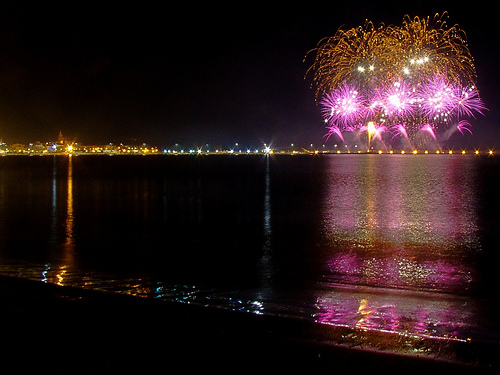 Events in Sardinia
The New Year’s Eve in Alghero is a great and long feast, a night with lights an colors organized in order to say good bye to 2011, and to wait for the new year with the people, the culture and the tradition of Sardinia. And this year the Cap d’Any de l’Alguer (“New Year’s Eve in Alghero” in Sardinian language) has a very rich calendar of events. New Year’s Eve in Alghero 2012 starts on December 31 at 11am with the concert Musica Ragazzi!, by the maestro Mauro Uselli, in “G. Manno" gardens. The second appointment of this long day is the wine and food exhibition, set in “G. Manno" gardens at 7pm: this is a great chance to taste the traditional dishes of Sardinian cooking. END_OF_DOCUMENT_TOKEN_TO_BE_REPLACED
22 November 2011

Culture in Sardinia
Christmas in Alghero becomes magical. Every year on Christmas Eve in the cathedral of the city renews an old medieval tradition called "Song of the Sibyl". The Song of the Sibyl, or Pythoness, was born in France at the turn of the ninth and tenth centuries AD. With the conquest of James I this custom thrives also in Mallorca and the Balearic Islands and to follow in Sardinia. Despite the Council of Trent orders to cancel the ceremony, the singing can only be preserved through the centuries in Majorca and Alghero. The Christmas carol, in Catalan, narrated through the use of images the anger of Christ and the day of Judgement, which will be biblically in the valley of Jehoshaphat, the seat of the divine tribunal. In the tradition of Alghero the singing provides, during the choir performance, two altar boys who are challenging a sword as a symbol of divine justice, and the other a scepter, a sign of the authorities capitulate. END_OF_DOCUMENT_TOKEN_TO_BE_REPLACED
21 November 2011

Food festivals and Folklore in Sardinia
It’s called Ajò a Ippuntare 2011 and is the long awaited annual Sardinian wine tasting event taking place in Usini, not far from Sassari. Specifically, the event is about the wine produced in this area of ancient traditions testified by the ancestral ruins all around the small town. Even the festival name (Ajò a Ippuntare), in 2011, sounds like an old exhortation to go broaching (ippuntare) the wine. Exhortation tasting like an ancient tradition of hand-crafted excellence. END_OF_DOCUMENT_TOKEN_TO_BE_REPLACED