Trekking in Sardinia is made of paths through an unspoiled nature and unexplored caves, centuries-old forests and huts that are similar to the ancient Nuraghe, with a human presence limited to the traditional one of the shepherds. And all these possibilities are contained in a unique place: the Supramonte.

The Supramonte is a complex of plateaus, bordered by the river courses of Cedrino and Rio Olai. Traditionally, this complex is divided into two parts: the sea Supramonte, overlooking on the Gulf of Orosei, between the towns of Baunei and Dorgali; the mountainous Supramonte, between the towns of Oliena, Orgosolo and Urzulei. Each one offers different possibilities for trekking in Sardinia.

END_OF_DOCUMENT_TOKEN_TO_BE_REPLACED 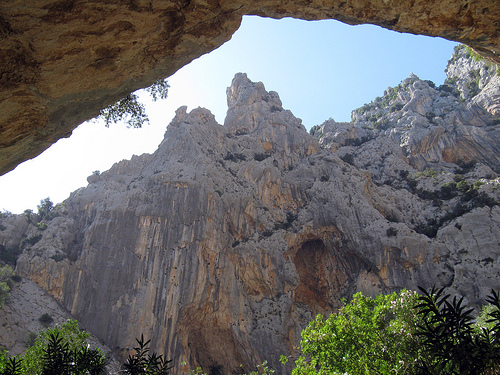 Nature in Sardinia
Gola di Gorroppu (Gorroppu gorge) has the power to shock visitors for a peculiar feature: the total silence. The vertical walls and the wild nature surrounding it cooperate to the legend of this canyon in the middle of the untamed Sardinia. There’re a lot of myths and legends about the area of gola di Gorroppu: according to a rumor, for example, from the highest point of this place you can see the stars even during the daytime; according to another legend, during the nighttime on the sides of the gorge you can see male fern magic flowers blooming. Only the bravest can reach and pluck them. Beyond the legends, Gorroppu gorge is a real canyon, one of the deepest of Europe, opening in the mountain range of Supramonte, created by the erosive action of the river Rio Flumineddu. END_OF_DOCUMENT_TOKEN_TO_BE_REPLACED
19 January 2012

Nature in Sardinia
For once again, in 2012, Sardinia will open its forests with Foreste Aperte 2012. The National Forest has intended to revive the initiative for the fourth year. One way to share and discover one of the many natural resources of the richest Sardinia. Thanks to the activities of Nordic walking, trekking, horseback riding or just hiking through nature photography, environmental education, music and sport, the organization continues to fulfill its task of protecting and enhancing the heritage of flora and fauna of the state-owned wood and forests of Sardinia. END_OF_DOCUMENT_TOKEN_TO_BE_REPLACED
30 September 2011

Nature in Sardinia
Open woods 2011 (Foreste aperte 2011), it’s the name of the trekking event organized by regional Sardinia’s authority for the wildlife promotion (Ente Foreste della Sardegna). On 9th October, the event will take place in Monte Grighine national natural reserve, in the hinterland of Oristano (near towns of Allai, Siapiccia, Villaurbana, Ruinas, Siamanna, Mogorella and Fordongianus, in the Sardinia Center). The day will be characterized by various guided tour in the wildlife with chances of doing some trekking, Nordic Walking, horse and mountain bike riding, climbing, bird watching, archery, orienteering in the wood workshop. All will starts at 9.30 am. END_OF_DOCUMENT_TOKEN_TO_BE_REPLACED