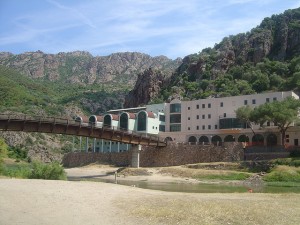 A place full of peace and greenery in Sardinia? The spa of Casteldoria. Located in the municipality of Santa Maria Coghinas, not far from Badesi and Valledoria, these baths are characterized by the presence of the Doria castle, dating from the twelfth century, which dominates the surrounding landscape thanks to the high position. The manor seems that fighters with its grandeur on the healing waters of the river below Coghinas, whose healing properties were known since the times of ancient Romans.

Just because health is the most precious thing we possess, it is logical that there should be cared for and the best place in Sardinia Casteldoria baths here in addition to spa treatments, there are opportunities for fun due to the nature trails where spas are surrounded by numerous historical sites and the area offers. It’s a fascinating place because it contains different types of environments: sea, mountain, lake, river and hot springs. The latter, called by locals “li caldani”, they reach a temperature of 70 degrees and, getting into the river, create very impressive-looking vapors that originated even legends. Among the spas of Sardinia, in short, those of Casteldoria are between the most special.