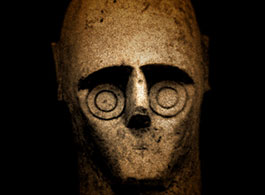 This-morning at dawn, a thick layer of fog hung over the island of Sardinia. I saw it from my rooftop terrace in the heart of the old town in Cagliari, right on top of the hill, but facebook posts soon revealed the whole island was enveloped in an unusual, heavy mist.

The Giants of Monte Prama are on the move, and you can feel it.

These ancient warriors, archers and shield-wielding boxers made of sandstone, are marching back to their birthplace, after a dignified reassembling by experts in the northern town of Sassari. Time of conception is estimated at 2,700 years ago.

They are returning to Cabras, on the extraordinarily beautiful Sinis peninsula on the central west coast. Entrails and shattered body parts, 5,000 in total, were found by a Sardinian farmer, ploughing his land in 1974. 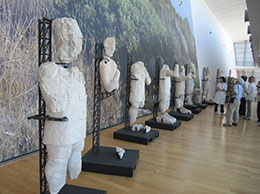 “How was your day, dear?”, his enquiring wife might have asked. “ I stumbled across a Nuragic army of giant stone warriors from 10th century BC.” “Lovely. Cup of tea?”

Researchers speculate as to the origins and role of this small but potent army, fewer in numbers and dating back 500 years further than China’s Terracotta Army, but made of stone, not pottery. Typically Sardinian, there aren’t many of them, but they’re tough.

Did they guard the graves of an elite Sardinian family in the Iron Age? Did they belong to a nearby temple, as yet undiscovered? Whatever they presided over, it was prior to the foundation of Rome. Think about that.

The Giants of Monte Prama, testimonies to the Nuragic civilisation that reigned on this ancient island for two thousand years until the end of 2nd century AD, will go on permanent display from Saturday 22nd March 2014.

Standing at over two metres tall, ten statues will be exhibited in a museum in Cabras and 28 in Cagliari, at the National Archaeological Museum, just a few hundred metres from my own apartment in Castello. 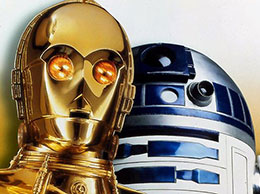 Let’s hope they behave and reassemblage has perfectly assigned each part to its original owner. For any Star Wars fans, it is impossible to look at the face of a Monte Prama giant, with those round, all-knowing eyes, without immediately thinking that they are direct ancestors of C-3PO. In fact, I’m sure Pramese was among the over six million forms of communication known to the droid.