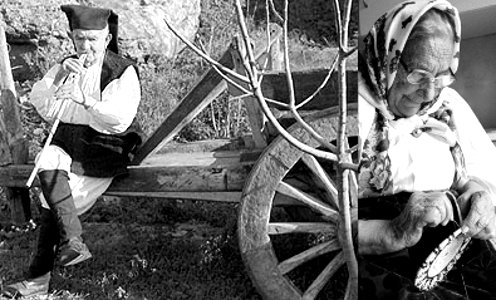 Sardinian is a language not a dialect. Incredible but true! A regional law of  1997 and a National law in 1999 confirmed this.  The laws were introduced in order to safeguard linguistic minorities and recognized the heartfelt battle for the political recognition of the Sardinian language. In this way, the various towns can draw up official documents in both languages and it’s not rare to find road signs in Sardinian!

SARDINIAN
Sardinian belongs to the Romance languages group and is spoken by  1.3 million people. It is  split  into four distinct variations: campidanese (spoken in the old province of Cagliari), logudorese  (widespread in the old provinces of Nuoro), sassarese (spoken in the  area from Sassari to Stintino) and gallurese (in the Olbia – Tempio area). The first two have a structure and synthax which is practically unvaried with respect to their Latin roots. Whereas,  sassarese and gallurese have been greatly influenced by the domination of Pisa and Genoa as well as by the migrations of people from Corsica.
Sardinian combines the original Nuragic element with Phoenician, Latin, Greek -Byzanthine, Pisan, Genoese, Arab, Spanish, Catalan and Italian..quite an assortment.
The first judicial  acts drawn up in Sardinian, dating back to the “giudicati” period (XI century) mention an ancient Sardinian common language, but it has always been difficult to find a real  linguistic unity. The region proposes a Sardinian language that mixes logudorese with campidanese. It’s a good starting point but at the same time there is the fear of losing local variations that survive particularly through the spoken tradition and in poems.
SOME EXAMPLES
Through the analysis of some widespread words, one can spot the many external influences. For example, the Sardinian  mùvara  means mufflon sheep ( “muflone” in Italian)   and is  a Sardinian/Corsican and pre-Roman term. Other words derive from Arab: like for example, accabbài  meaning  finish (“finire” in Italian).  Arbatax (the name of a town on the eastern coast)  means 14 and indicates the number of a tower in the eastern coast. Phoenician is the linguistic origin of words like mitza, spring (“sorgente” in Italian), and tsippiri for rosemary (“rosmarino” in Italian). From Pisa and Genoa comes becciu,  old (“vecchio” in Italian), and diaderu really (“davvero” in Italian).  Of Catalan origin  is cullèra, spoon (“cucchiaio” in Italian).
Amongst the idioms originating straight from Latin, Sardinian has maintained these traits the most. For example, domu means house (“casa” in Italian) ; cras means tomorrow (“domani” in Italian); sciri means knowledge, (“sapere” in Italian) these three terms are absolutely identical in Latin.  Mannu means large and originates from the Latin  magnus  (“grande” in Italian). 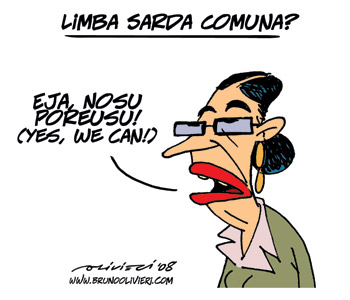