The Southern coast’s panoramic road starting from Teulada and going  up to Santa Margherita allows one to discover a series of extraordinary coves, where Sardinia’s distinguishing characteristics let out  the best of  their  charm: stunning beaches, an emerald colour and transparent sea, spectacular cliffs and vegetation. The panorama and the nature of the island aren’t the only feature as they are  accompanied by a cultural aspect too, particularly when taking into consideration the promontory hosting the Roman city of Nora, its marvellous ruins framed by  the crystal clear sea. The southern coast is one of the many destinations that must be seen whilst on holiday in Sardinia. 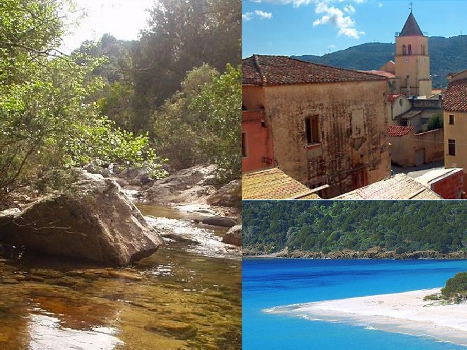 Teulada is an important centre located between a vast hinterland of mountains and forest and an exquisite  coast. The road  that begins near the graveyard rejoins the road from Domus deMaria and goes all the way up to the “Is Cannoneris” forest, one of the largest of the island. The coast, which includes Capo Teulada,  a promontory  of 200 metres in height, is characterized by wonderfully breathtaking coasts, with a variety of beaches accessible from  the Southern coast’s panoramic road.
The  military training area borders on the west with the beautiful beach of “Porto Tramatzu”, nearby is the port of Teulada and the “torre del Budello” a tower built in 1601 to defend the village,  facing it is the large red islet. After the training area, the road leads to Sant’anna Arresi,  a small village of Nuragic origin, as can be seen in the presence of the Sant’Anna Nuraghi. A few more kilometers straight ahead take to Porto Pino,  a pretty seaside villagea gain characterized by a long stretch of white sand touching a perfectly transparent sea, behind it a gorgeous pine forest of Aleppo pine trees.
DOMUS DE MARIA 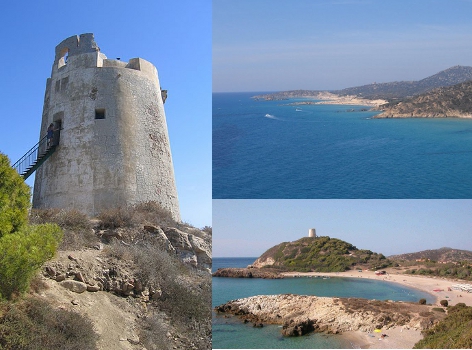 Domus De Maria was founded in 1700 by the old Catholic educational order of the Piarists (“Scopeti” in Italian), the small town is the main starting point for excursions to the forests of the Sulcis area, especially Is Cannoneris, where one can admire the regal Sardinian deer and climb to the top of Mount Sèbera.
The panoramic road of the southern coast  leads to the Chia Tower dating back to the 17th Century with the ruins of Bitia, one of the most important Carthaginean cities of the island. From the ruins one can contemplate the long beaches of Chia (amongst the most beautiful, I find), touched by an unimaginable  turquoise colour sea.   Eastwards lies Capo Spartivento, a huge granite rock  dominated by a lighthouse. In the direction of Teulada, granite schistic rocks open out onto bays like that of Malfatano port and Cala Piscinnì,  both with a tower, the bay of  Piscinnì boasts three beaches; a large one and two smaller ones.
PULA 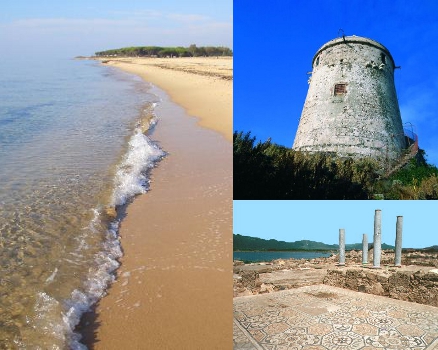 Pula is a large  agricultural valley that includes in its territory a large area of the Sulcis mountains,  the forest of Pixinamanna, in the northern part, formed by an imposing group of  granite rocks, their colour varying from  reddish  to green, due to the luxuriant vegetation. To the south of Pula, a road leads to the important ruins of Nora,  once a  Phoenician city which later became Punic/Roman. Here one can go on a guided walk of these amazing ruins ( luckily it’s very windy so even in summer the stroll never gets too hot) and learn how the city once was, discover its ancient drainage and paving methods and what the ruins represent…  termal baths, temples, houses, a beautiful theatre and stunning examples of mosaics all dominated in the background by the tower of saint Efisio, on the very top of the promontory.
Near the ruins in fact lies the church of Saint Efisio, built by the monks of san Vittore and consecrated in the XI century, it represents the last destination of an  evocative pilgrimage that every year, at the beginning of May, brings many devoted Catholics of the area, as they are  accompanying the statue of the patron Saint of Cagliari saint Efisio to Nora.

The most important seaside resort of the area is Santa Margherita di Pula, combining flourishing agriculture and large tourist resorts all set in a thick coastal forest.