Description of the tour

Experience Sardinia like never before with this historic Sardinia tour. Island rich in breathtaking views and fascinating traditions, Sardinia boasts a unique and unparalleled historical heritage. In this archaeological itinerary, we will let you discover history, Sardinian territory and its most famous monuments, among thousands of curiosities and emotions. Program On Request
Information on the tour
Where you will go 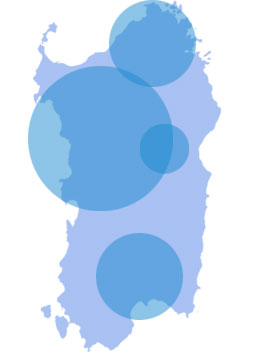 The price includes
The price DOES NOT include

The starting point of this Sardinia historical tour is Cagliari, where you will stay at the hotel. You can spend your first day to free exploration of the city.

The second day will be a journey through the underground cavities of Cagliari, and you will visit the most important points of interest in underground Cagliari. The first stop will be the Crypt of Santa Restituita in the historic district of Stampace, which still contains the remains and testimonies of various dominations of the island. The second stop will allow you to discover the Sant'Efisio Prison, also in Stampace, one of the most important historical sites in Cagliari’s religious and cultural tradition. Famous for having been the place of imprisonment of Efisio, the most loved saint and martyr of Cagliari, before being executed by the Romans in 303 AD. Then you will enter the Gallery, the refuge of Via Don Bosco, created at the end of the XVIII century and used as an escape route during the Sardinian-Piedmontese conflict and as a bomb shelter during the Second World War. The whole route will be enriched by a tasting of wines, meats and cheeses accompanied by excellent carasau bread, in the evocative setting of the walls of the Castello district, in the upper part of the city. Lunch and evening are not part of the tour program and you can organize yourself as you prefer.

After breakfast, you will go to Barumini to visit the Nuragic village of Su Nuraxi, considered the largest Sardinian archaeological complex and recognized as a UNESCO World Heritage Site. The Nuraghe, dating back to the 16th-14th century BC, may have served as a refuge or a location for the village chief, or it may have been the object of religious worship, in any case it has a magical and ancient atmosphere. Around the monument you will observe the remains of the circular-plan village, strategically connected to an entire system of Nuragic sites. The next two stops on this day's tour are Casa Zapata, the ancient noble residence of the 1500s, belonging to the Sardinian-Aragonese barons, and the renowned Cantine Olianas, which you will visit on a thorough food and wine tour, lunch included. After lunch, we will visit the Giara di Gesturi, a boundless plateau known for being the habitat of the famous Cavallini della Giara, the last wild horses in Europe. The plateau is considered an ecosystem of national importance and is covered by woods, Mediterranean scrub, grasslands and small marshes. Giara is the home not only of wild horses, but also of wild boars, foxes, wild cats and many species of birds that make it an ideal destination for bird-watching.

On the third day you will discover the site of the first Geomineral Park in Europe, the Sulcis Iglesiente. Over the centuries, the Sardinian landscape has undergone countless variations, especially with the development of mines. After this tour, you can spend some free time on one of the many and beautiful beaches of the south-western Sardinian coast.

On this day you will discover the fourth largest island in Italy, the island of Sant'Antioco. Located 84 km south-west of Cagliari, Sant'Antioco has undergone Phoenician, Roman and Punic influences, which can still be seen today. The first stop will be the Barreca Archaeological Museum, which houses the Punic and Roman finds from the island archaeological excavations. You will then move towards the Hypogean Village of Sant'Antioco, originally a Punic necropolis and subsequently desecrated by the inhabitants of the island, who used the burial chambers as a refuge against Arab incursions. Finally, you will see the Basilica of Sant'Antonio, erected in the 5th century on the site of the martyrdom of the saint.

After breakfast at the hotel, on the sixth day you will head to Tharros and its archaeological area, where you will personally discover the history of one of the most important ancient commercial landing places in the Mediterranean Sea. Your tour will be even more unique thanks to the surrounding panorama that you can see from the nearby tower of San Giovanni, date back to the 17th century. Then you will visit the village of Cabras, not far from Tharros and built near the pond of the same name, a village famous for the production of an unbeatable mullet Bottarga that you can enjoy during your walk. Your day will end with a visit to the Archaeological Museum, where you will find the Giants of Mont'e Prama, massive statues up to 2 meters high depicting the Nuragic warriors, found by pure chance in the 70s.

On the seventh day you will leave for Supramonte and then arrive in Mamoiada, where you can live an exciting experience for all your senses: you will start with a guided tour of the archaeological site Sa Perda Pintà, continuing towards the headquarters of the Mamuthones and Issohadores, all accompanied by musical entertainment and zero-kilometer cheese tasting, and by the winery's perfumes. We have organized the Lunch with the Shepherds for you, while during the afternoon you will discover Orgosolo and its murals.

DAY 8. End of the itinerary and return home

After breakfast at the hotel, you can relax a little before returning to the airport to go back home.